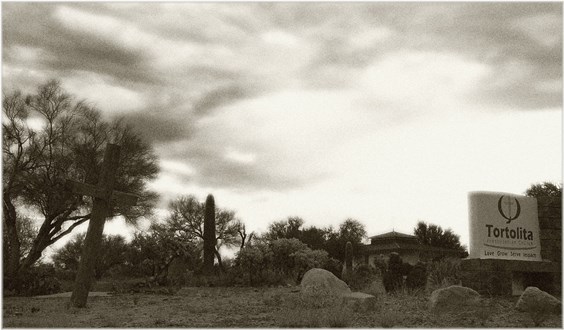 Tortolita Presbyterian Church was initiated by the Presbytery de Cristo with the purchase of five acres of land in 1981, cornered by Thornydale Rd. and Camino Alto in Northwest Tucson, AZ.

On December 15, 1985 a steering committee appointed by Presbytery de Cristo elected Jonathan Deily to serve as organizing pastor. The first service of worship to be held in the new building was the Celebration of The Resurrection, on Easter Sunday, March 30, 1986, followed by a continental breakfast. The name Tortolita was selected by the congregation in May of 1986. The word "tortolita" is translated from Spanish to mean "little turtle dove".  Presbyterian Women began meeting in November 1986, followed by a sewing circle, a youth fellowship, weekly Bible study group, and monthly men's fellowship. Later, youth began attending summer camp at Montlure.

A service of organization was held December 6, 1987 for the congregation to proceed with the chartering of the church. The chartering procedure progressed to inviting interested individuals to sign the membership covenant. Permission was given by the Presbytery de Cristo New Church Development Committee for Elders to be elected. A time capsule was placed in 1989.

In 1990, Rev. Jonathan Deily moved on to serve another congregation in Kansas. Later that year, Rev. Milton Emmons served as interim pastor until mid 1991, at which point Rev. Betty May Seal was calledas interim pastor. In February 1993, Rev. Bill Evans was installed as pastor of Tortolita. Deacon’s were elected in 2000. Tortolita celebrated a mortgage burning party on August 24, 2001.

During Rev. Evans’ ministry, Tortolita grew to include both a contemporary and a more traditional worship service, strong youth programs, mission efforts, and involvement in the leadership and development of Montlure Camp. Additionally, two more buildings were constructed largely by church members and volunteer labor: the pastor’s office, and Ironwood Hall, which included a separate fellowship hall with a kitchen, bathrooms,and much needed Christian Education classrooms.

After Rev. Evans left Tortolita in June of 2005, the church was without a pastor for a period of one year. During that time, Rev. Carla Williams, Associate Pastor at St. Andrew’s Presbyterian Church served as Moderator of the Tortolita Session, and was joined by a number of other pastors who filled in as guest speakers. Largely, the church was held together with a lot of prayer and the work of dedicated volunteers.

In June of 2006, Rev. Jon Ashley was called as pastor. A new small group ministry was initiated, called Life Groups. In December 2006, the Session formed a strategic planning team, called the Tortolita Dream Team, to help guide the church in capturing a God-sized vision for its ministry. Over the next three years, the church grew in membership by 80% (winning the Rowley Church Growth Award as the fastest growing church in Presbytery de Cristo), added a Wednesday Night Live midweek discipleship program, and in March of 2010, added a Foundational Statement to its guiding vision.

In the four years from 2011-2015 the Tortolita Session faithfully served in tandem with the Presbytery de Cristo to provide pastoral leadership with thanks to Rev. Terry Swicegood and Rev. Tom Green. The Session took prayerful and thoughtful time to consider Tortolita’s ministry direction which resulted in a renewed commitment to the excellent Vision, Mission and Values which were established in previous years. The Holy Spirit led the Session to a new resolve to faithful and obediently lead Tortolita Presbyterian Church into the call God gave Tortolita long ago!

In January, 2015 the Session worked with the Presbytery de Cristo to identify possible candidates for the desired pastoral leadership for Tortolita. After much prayer and conversation, the Tortolita Session and the Presbytery agreed that Pastor Jennifer Cummins was being called to pastor Tortolita. In May, 2015 Pastor Jennifer began her ministry with Tortolita. Now, with great anticipation and assurance that God is up to great things in northwest Tucson, Tortolita Presbyterian Church is on the move! Tortolita is a beacon of Christ’s light shining brightly on Thornydale Road in northwest Tucson inviting people to join us in our mission to LOVE, GROW and SERVE in Jesus’ Name that we might IMPACT the world for Christ!

We look forward to hearing from you! Please feel free to call the church office at 520.572.1210, or you may email us and we will get back to you as soon as we are able.